America is at a crossroads, and I believe we should take every opportunity to stand up for the things of God and His Word.

The headlines seem to constantly boast of God’s absence in our modern world. Terrorism, shootings, abortion, same-sex marriage; the list goes on. America has abandoned the values that it was founded upon and exchanged them for worthless, corrupt standards. What’s worse is many Christians are apathetic or ignorant to these issues or simply afraid to take a stand for what they believe. People across the country ask for God to bless America, yet we live in a country filled with immorality and our nation as a whole is unwilling to repent. Everyone is so careful not to offend anyone- unless it’s God.

I will be voting for the first time this year. It’s been a chaotic, confusing election, but it’s been a great lesson in examining my worldview, making tough decisions, discussing these issues in a mature manner, and most importantly, trusting my sovereign God.

It’s been disappointing to see many citizens choose candidates based on their outward appearance, their sentimental or emotional connection to the candidate or even choosing to not vote at all. I realize that this election is painful to watch, and most of us just want it to be over, but this could be the most important election in the history of our country. Choosing apathy or ignorance when our country is in the state that it’s in, will prove fatal for America. Now is the time for us to speak up, stand up, and pray, pray, PRAY!

Too often we enjoy the comfort of opinion and emotion without the discomfort of thought.

This election will determine what kind of country the future will hold. Who you vote for this year will impact your children, your grandchildren and most likely generations to follow. Voting is the essence of our responsibility as Christians and patriotic Americans to preserve our freedom, and honor the ones who gave their lives to ensure that freedom remains.

I’m looking at this election not as a name that I will check on Tuesday, but rather a worldview that correlates closest with my own; mine being a Christian worldview. Voting for a candidate does not mean you agree 100% with every decision they’ve made, each statement they’ve spoken or where they stand on all issues. Once you boil it down to a worldview rather than a name, it is a much easier choice to make.

What issues matter to you? In listening to bits and pieces of the painfully argumentative debates, I’ve gotten a pretty good idea of where each candidate stands on issues that are important to me. There are several websites that share a summary of each candidate’s views on top issues. Before you head to the polls, critically examine where each candidate stands on hot button issues such as sanctity of life, religious liberties, support of the military, the economy, immigration, and the Supreme Court. Also, examine how the candidates plan to uphold the Constitution-the document America was founded upon.

Here are some questions that the Master’s University put out during their summit on voting according to a Christian worldview.

Our country cannot continue to stand on the cultural ideal that deems the intentional killing of innocent children a “right.” What a depraved society we’ve become that valuing a baby’s life is frowned upon. Nor can a nation be sustained under the socialist mindset that hard workers should provide welfare for those who won’t provide for themselves. First of all, the American Dream was founded on hard work, not handouts, and second of all, it is the church’s responsibility to come alongside those in need-not the government’s. America was born out of an escape from “big government.” Our Founding Fathers fought against those who claimed to know best for their lives. On July 4th 1776, our nation declared that if government gets in the way it is the responsibility of the governed-us-to alter or abolish it.

The two enemies of the people are criminals and government, so let us tie the second down with the chains of the Constitution so the second will not become the legalized version of the first. 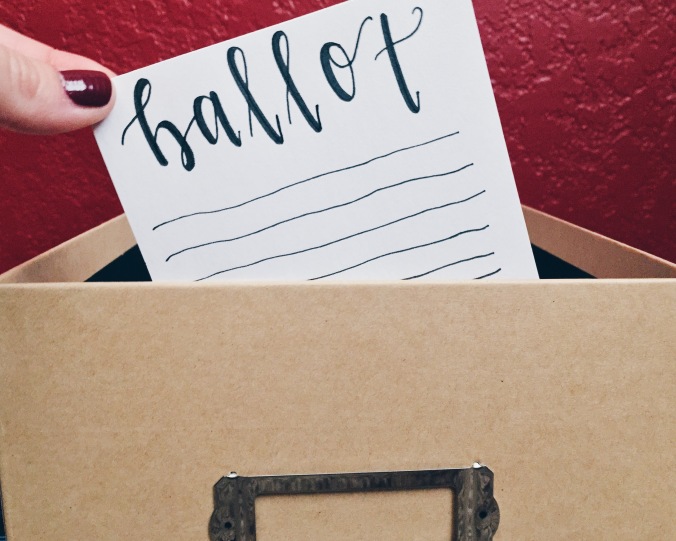 To the Christians out there who are choosing not to vote this year because the candidates are “too unrighteous,” I kindly ask you to reconsider. First of all, no one is righteous. {Romans 3:10} Man is sinful and no matter how great the candidates, we will always be choosing between the lesser of two evils because we are ALL sinful. Secondly, this election is about much more than the presidency. There is a long list of leaders below the first box on the ballot that matter just as much. Your governors, congressmen, senate members, and even mayors will impact your lives just as much, if not more than who’s in the White House. Also, reconsider third party votes. History displays that third party votes typically benefit the leading candidate. With the Electoral College, unless a miracle were to occur, one’s only choice is between Clinton and Trump. Neither is optimal, but they are our choices nonetheless.

The worst thing you can do for our country is vote uninformed or not vote at all. In the 2012 election 93 million eligible voters chose not to vote because they deemed their vote “unimportant.” A mere fraction of those could have dramatically changed the outcome.

Silence in the face of evil is itself evil: God will not hold us guiltless. Not to speak is to speak. Not to act is to act.

Although this election may be the most important of our lifetime, none of this matters in comparison to eternity. God already knows the outcome of this election. He knows how He is going to use the next president for His greater plan, just as He has used every leader in history. Man likes to think that we are in control, but ultimately God is always in control.

Let everyone be subject to the governing authorities, for there is no authority except that which God has established. The authorities that exist have been established by God.

If our hope rests in who the next president will be, there is a great chance of being disappointed. Jesus Christ is the only one who can provide true, eternal, reliable hope. God is sovereign, He is in control; let your confidence be found in Him, rather than the unreliable character of Trump or Clinton.

As believers, we are co-heirs with Christ. Christ is King of everything, therefore we get to look forward to inheriting everything right alongside of Him! Heaven is our hope-cling to that. Politicians will always let us down, whereas Christ never will.

Most people, if they had really learned to look into their own hearts, would know that they do want, and want acutely, something that cannot be had in this world. There are all sorts of things in this world that offer to give it to you, but they never quite keep their promise.

We can make prayer our first response and not our last resort. The movie War Room reminds me of the power of prayer. We ALWAYS win when we fight the battle on our knees.

First of all, then, I urge that supplications, prayers, intercessions, and thanksgivings be made for all people, for kings and all who are in high positions, that we may lead a peaceful and quiet life, godly and dignified in every way.

Here are some things that are on my heart to pray:

HIS KINGDOM COME, HIS WILL BE DONE, ON EARTH AS IT IS IN HEAVEN!!